What is the power of trauma? What is the price of shame? What does it take to become truly heroic? This compendium of 19 chapters offers a fascinating look into the psychology behind Black Panther. Book jacket. The Art and Making of the Expanse by Titan Books Staff

Official companion book to the hugely successful TV series, showcasing spectacular concept art and candid behind-the-scenes photography, accompanied by quotes from the showrunners. The Expanse is a modern TV revelation. Adapted from the hugely popular novels by James S. A. Corey, this Hugo Award-winning story of conspiracy, adventure and intrigue in a galaxy tearing itself apart through civil war has captivated audiences worldwide with its high-concept vision of the future.The Art and Making of The Expanse goes behind the scenes of the first three seasons of the show, exploring how the bestselling books were turned into one of the most highly regarded science fiction TV series of the 21st century. Packed with stunning concept art and compelling photography, the cast, crew and creators reveal the ideas, processes, inspirations and obstacles behind the making of this massively popular series. ...Show more Keanu Reeves For Your Consideration by Larissa Zageris; Kitty Curran

For an actor who's been in so many mega-hits and equally mega misses, it can be tough to track Keanu Reeves's accomplishments. But true fans know that Keanu is so much more than his Bill and Ted persona, both onscreen and off. During his long career-over 30 years, though you wouldn't know it from his im mortal looks-he has constantly subverted Hollywood stereotypes and expectations. He's the type to start his own publishing company, reread Hamlet, write a grown-up children's book, photobomb people's weddings, eat lunch alone in the park while looking very sad, and give away his salary to the film crew. For Your Consideration- Keanu Reeves examines the ways in which Keanu strives to be kind and excellent in work and in life. The authors also explore various Internet conspiracies about his age, help you identify which Sad Keanu meme you are, give you the Keanu and Winona Ryder fanfic your heart desires, and much, much more. ...Show more Packed with photographs of the most terrifying scenes in cinema history, this book is the definitive guide tracing the story of horror, decade-by-decade. Providing a witty and informative critique of over 300 films and several TV series and the literature that accompanies them, this offers a superb intr oduction for beginners as well as something new for the die-hard horror fan. Horror is one of the most popular and influential genres in cinema, a perennial favourite that just won't stay dead. Initially banned or shunned creations are now regarded as movie milestones with cult appeal. This book covers the hidden gems, big-budget duds and foreign contributions of the Horror scene. Whether you're a seasoned, horror expert or a tentative horror explorer, this is the ultimate guide through a century of fear. ...Show more

Save the Cat! The Last Book on Screenwriting You'll Ever Need by Blake Snyder

Here's what started the phenomenon: the best seller, for over 15 years, that's been used by screenwriters around the world Blake Snyder tells all in this fast, funny and candid look inside the movie business. "Save the Cat" is just one of many ironclad rules for making your ideas more marketable and you r script more satisfying, including: The four elements of every winning logline The seven immutable laws of screenplay physics The 10 genres that every movie ever made can be categorized by -- and why they're important to your script Why your Hero must serve your Idea Mastering the 15 Beats Creating the "Perfect Beast" by using The Board to map 40 scenes with conflict and emotional change How to get back on track with proven rules for script repair This ultimate insider's guide reveals the secrets that none dare admit, told by a showbiz veteran who's proven that you can sell your script if you can save the cat. ...Show more The Quite Nice and Fairly Accurate Good Omens Script Book contains much that is new and revelatory and even several scenes that are not actually in the final television series. 'One of the most hotly anticipated TV shows of the year' Independent 'Even if you're very familiar with the original novel, thi s is a different experience... so damned charming and quirky that it feels like a must' Starburst Neil Gaiman's glorious reinvention of the iconic bestseller Good Omens is adapted from the internationally beloved novel by Terry Pratchett and Neil Gaiman and is soon to be a massive new TV launch on Amazon Prime Video and the BBC. The series is written and show-run by Neil himself and stars David Tennant, Michael Sheen, Jon Hamm and Miranda Richardson, to name but a few. **Includes an introduction by Neil Gaiman about bringing Good Omens to the screen** Before he died in 2015, Terry Pratchett asked Neil Gaiman to make a television series of the internationally beloved novel they wrote together about the end of the world. And so, Neil began to write. And continued to write until he had six episodes that brought an angel, Aziraphale, and a demon, Crowley, (the only things standing between us and the inevitable Armageddon) to life for the screen. Contained between the covers of this book are the scripts that Neil wrote, which later turned into some of the most extraordinary television ever made. Take a tour behind the scenes with a text that reveals the secrets of the show, still has the missing bits and, sometimes, asks for the impossible. Step backstage and see the magic for yourself. You may just learn as much from the scenes that never made the final cut as from those that did. ...Show more The ultimate TV companion book to Good Omens, a massive new television launch on Amazon Prime Video and the BBC for 2019, written and show-run by Neil Gaiman and adapted from the internationally beloved novel by Terry Pratchett and Neil Gaiman. Based on the cult classic novel by Terry Pratchett and Nei l Gaiman, Good Omens is one of the most hotly anticipated TV shows of 2019. Reinvented for television with scripts by Neil himself, and featuring a stellar cast including David Tennant, Michael Sheen, Jon Hamm, Jack Whitehall and Miranda Richardson, to name but a few, this major TV show will be shown first on Amazon Prime Video and then on the BBC later in the year. Keep calm, because The Nice and Accurate Good Omens TV Companion is your ultimate guide to the upcoming apocalypse, which is scheduled to happen on a Saturday, just after tea. The series sees an angel (Sheen) and a demon (Tennant) team up in order to try and sabotage the end of the world... Featuring incredible photographs, stunning location shots, costume boards, set designs and fascinating character profiles and in-depth interviews with the stars and crew, this behind-the-scenes look into the making of Good Omens is an absolute must for fans old and new - and will shatter coffee tables around the world. ...Show more

Fritz Lang's first sound feature, M (1931), is one of the earliest serial killer films in cinema history and laid the foundation for future horror movies and thrillers, particularly those with a disturbed killer as protagonist. Peter Lorre's child killer, Hans Beckert, is presented as monstrous, yet sym pathetic, building on themes presented in the earlier German Expressionist horror films like The Cabinet of Dr. Caligari and The Hands of Orlac. Lang eerily foreshadowed the rising fascist horrors in German society, and transforms his cinematic Berlin into a place of urban terror and paranoia. Samm Deighan explores the way Lang uses horror and thriller tropes in M, particularly in terms of how it functions as a bridge between German Expressionism and Hollywood's growing fixation on sympathetic killers in the '40s. The book also examines how Lang made use of developments within in forensic science and the criminal justice system to portray a somewhat realistic serial killer on screen for the first time, at once capturing how society in the '30s and '40s viewed such individuals and their crimes and shaping how they would be portrayed on screen in the horror films to come. ...Show more The crucial sequel to the "New York Times"-bestselling "The Secret History of Twin Peaks, " this novel by the show's co-creator reveals what happened to key characters in the 25 years in between the events of the first series and Showtime's 2017 revival.

Hollywood Wants to Kill You: The Peculiar Science of Death in the Movies by Michael Brooks; Rick Edwards

Asteroids, killer sharks, nuclear bombs, viruses, deadly robots, climate change, the apocalypse - why is Hollywood so obsessed with death and the end of the world? And how seriously should we take the dystopian visions of our favourite films? With wit, intelligence and irreverence, Rick Edwards and Dr M ichael Brooks explore the science of death and mass destruction through some of our best-loved Hollywood blockbusters. From Armageddon and Dr Strangelove to The Terminator and Contagion, they investigate everything from astrophysics to AI, with hilarious and captivating consequences. ...Show more THE ART OF FROZEN 2 by Jessica Julius

Through never-before-seen development art, character sketches, storyboards, and color scripts, The Art of Frozen 2 gives fans a front-row view of the vast creative effort behind the much-anticipated sequel to Frozen. Filled with gorgeous four-color images and fascinating facts and details from the produ ction team, it's the ultimate insider's look. ...Show more 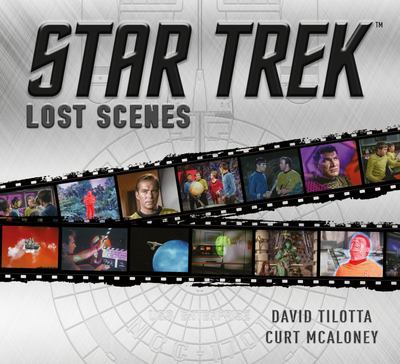 Fascinating compilation of previously unseen and fully restored stills from The Original Series, showing William Shatner, Leonard Nimoy and other cast crew filming the iconic show. Think you know everything about the Original Series? Think again. Star Trek: The Lost Scenes is packed with hundreds of nev er-before-seen color photos of the world's ultimate sci-fi series. Professionally restored images are used to chronicle the making of the series, reassemble deleted scenes, and showcase bloopers from the first pilot through the last episode. Whether you're a new Star Trek fan or a seasoned veteran, this book is a must-have. ...Show more